The invention of birth control was a game-changer for women’s health allowing women to proactively manage their reproductive health and prevent pregnancy. Since the groundbreaking FDA approval of the first oral contraceptive in 1960, we now have a wide range of options to meet our unique needs. Today’s birth control options range from traditional barrier methods to the high-tech LARCs (long-acting reversible contraceptives). Since the reversal of Roe vs. Wade, more women are seeking to ensure they are managing their reproductive health in the most effective, comfortable way. With many options for birth control available, you may be wondering which is best for you. Here we’ll break down the primary methods: barrier methods, combination hormonal contraception, progesterone-only systemic contraception, long-acting reversible contraception, and sterilization. 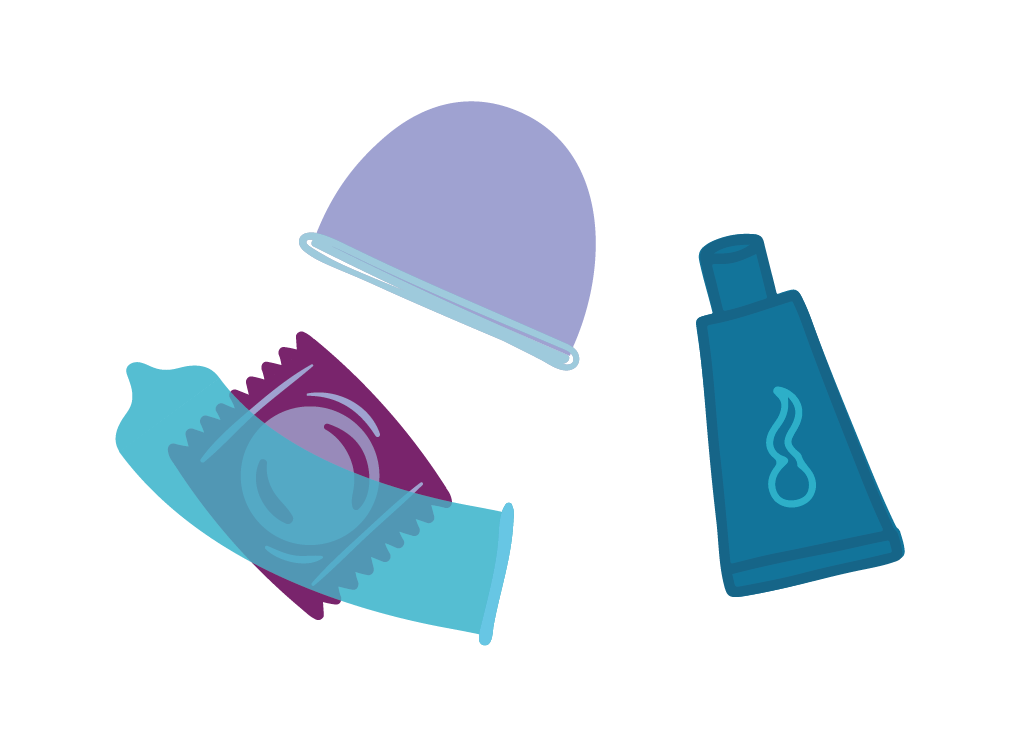 For the male partner

The most commonly used barrier method for the male is the condom, as the condom collects sperm and acts as a barrier to pregnancy. Most are made of latex, but for those with allergies, non-latex varieties also exist. The condom gives the added benefit of protecting women from a variety of STDs, such as HIV, gonorrhea, and chlamydia.

Condoms are known to have a higher rate of failure; meaning, up to 15% of couples may experience an unplanned pregnancy when using condoms alone as their contraceptive method. For this reason, heterosexual couples may choose to use condoms plus another form of birth control (like the pill, IUD, or shot) for added protection against unplanned pregnancy.

Please also keep in mind that condoms are the only method to protect against STDs. The other options we’ll get into below are designed to prevent pregnancy, but do not provide protection against STDs.

For the female partner

The diaphragm is also considered a barrier method and is one of the oldest contraceptive methods dating back to the 1930s (Though, perhaps made popular again in that famous scene in Sex And The City). It is a soft, plastic dome with a flexible ring.  Spermicide is applied to the outer ring and cup. It is inserted into the vagina and hooked under the pubic bone up to 2 hours before having sex. The diaphragm, if inserted correctly, will cover the cervix and, again, act as a barrier to sperm.  It is recommended that it be kept in for at least 6 hours after sex to ensure prevention of pregnancy, and can then be removed, cleaned, and reused. Unlike the condom, a diaphragm is prescribed by your provider and requires a fitting in the office. If you use your diaphragm perfectly every single time it is up to 94% effective, but in reality it can be closer to 88% effective.

Also in this category is the contraceptive sponge, which also blocks sperm from reaching the uterus and has spermicide embedded in it (Seinfeld fans may recall Elaine’s humorous love of the sponge). The sponge is inserted into the vagina and pushed up against the cervix. Like condoms, the sponge, along with spermicidal gel, can be conveniently purchased at your local drug store without prescription.

Finally, there are spermicides and contraceptive gels. These work by creating an environment that is hostile to sperm, killing it before it can travel to the egg. They are inserted into the vagina 10-15 minutes before sex. Spermicide is only 72% effective at preventing pregnancy, so many may choose to use this in combination with condoms.

Contraceptive gels (like Phexxi) operate in a similar fashion by lowering the pH in your vagina to make it harder for sperm to move. The gel is inserted into your vagina within an hour of having sex. Some women may prefer this option as it is non-invasive and hormone-free. When used correctly, it is up to 93% effective. 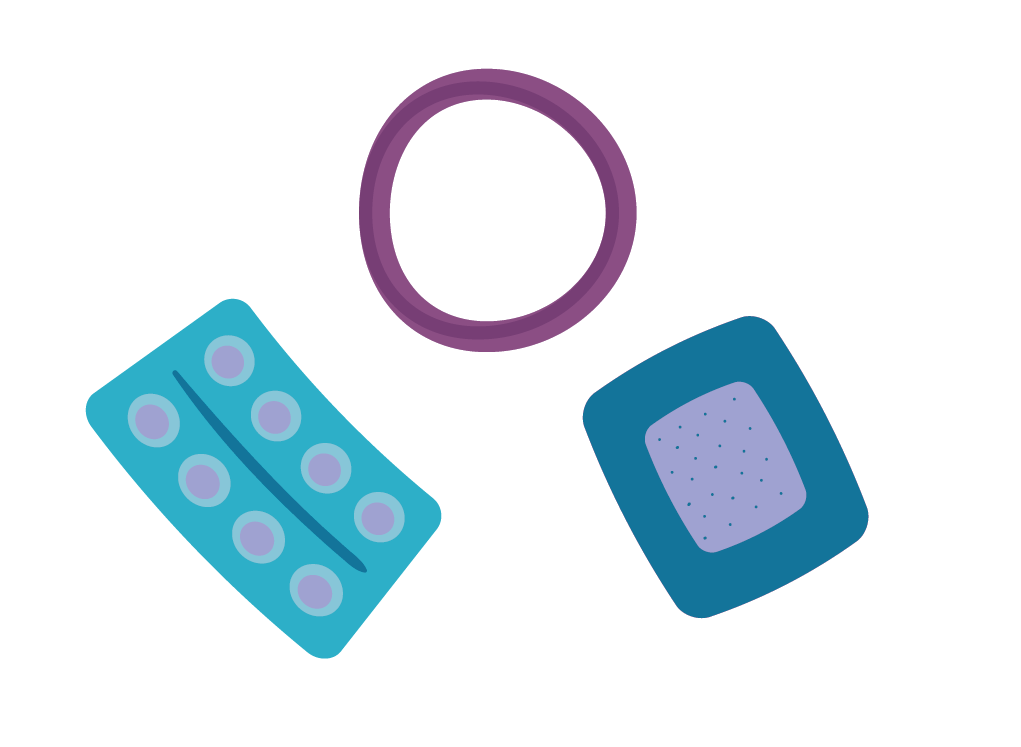 Most commonly recognized in the form of the pill, ring, or patch, combination hormonal contraceptives (CHCs) are one of the most commonly used birth control methods in world. They are considered systemic birth control, as they are absorbed into your body and work their magic on the pituitary gland in your brain, blocking your ability to release the hormones that make you ovulate (release an egg). The effectiveness of these methods is largely dependent on the user and the ability to use them as prescribed, but when used correctly they are up to 99% effective.

CHCs have undergone many changes over the past 60 years and, as a result, there are multiple options. Most contain the hormones estrogen and progesterone and vary in the amount of both. CHCs come in a variety of forms, such as the daily pill, weekly patch, or a monthly intravaginal ring.

What you may not know is that CHCs actually have benefits beyond contraception. This type of birth control is also used to suppress acne, help manage menstrual migraine, improve cycle regularity, and reduce the risk for ovarian cancer. CHCs do have some short falls, some of which are quite serious, such as stroke or development of blood clots. As a result, it should not be the first choice for women who smoke or for those suffering from certain medical problems like hypertension or clotting disorders.  You should discuss CHC with your provider to determine if it is a good option for you.

Similar to CHC, progesterone-only systemic contraception works in your brain, blocking the hormones that cause ovulation. Progesterone-only systemic contraception is a favorite among nursing mothers, as it causes no reduction in breast milk that the estrogen in CHC may sometimes cause.  It is also a preferred method for women with hypertension, smokers, and other medical conditions where estrogen is contraindicated.

The most commonly used variety in this category is the mini-pill. It is called a mini-pill because it has no estrogen in it.  Unlike most of the CHC options, there are no placebo pills (pills without hormones) in the pack. You take the same amount of progesterone every day. As a result, you do not get a true period. An annoying side effect, with this pill, can be irregular bleeding and spotting which occurs for some women.

Finally, there is a shot of a medicine called Depo Provera, which is given every three months. Depo Provera is perhaps less popular as its side effects can include weight gain and acne. Like all options, you should discuss this with your provider to see if it right for you. 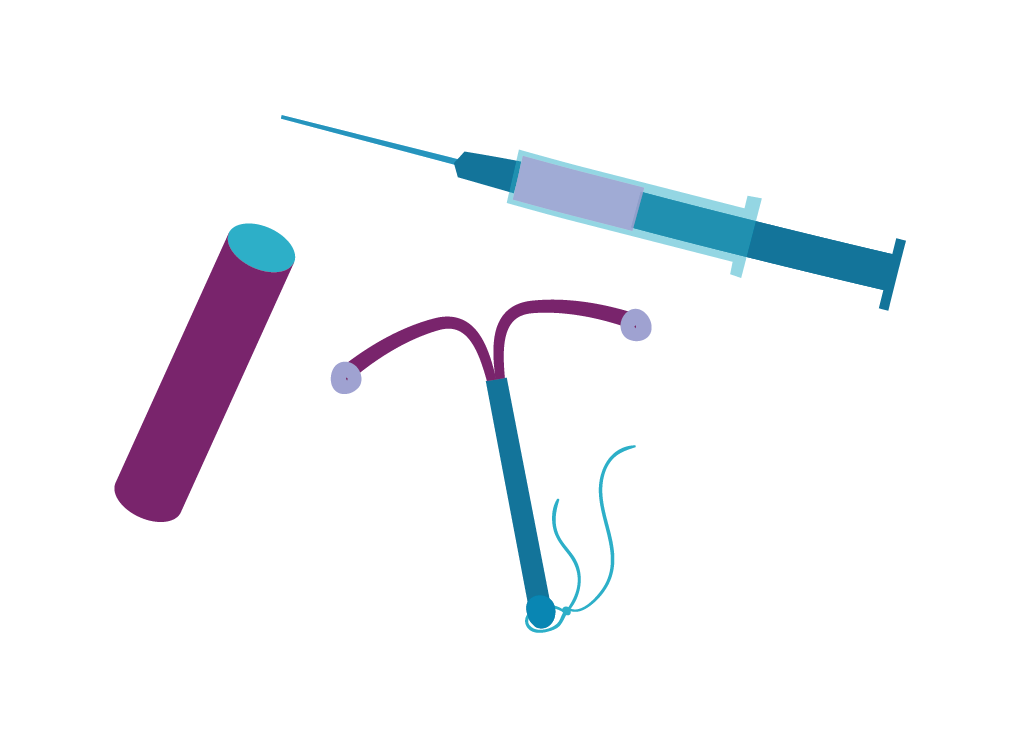 Progesterone-only systemic birth control is also available as an implantable rod (called Nexplanon.) Nexplanon is a LARC (long-acting reversible contraceptive). Nexplanon frees the worry of having to remember to take a daily medication.  The rod is injected under the skin of the upper arm and provides birth control for three years, and is 99% effective.  Nexplanon will not give most women the regular cycle we see with the CHC, and it requires a small surgical procedure to have it placed and removed. It is a favorite of young patients who do not like the IUD option (more about this later!).

The IUD is a small, T-shaped plastic device inserted by your provider as an in-office procedure. IUDs contain progesterone or copper as their active component. The slowly released progesterone or copper changes the cervical mucous and thins the uterine wall, killing sperm or making it immobile.  IUDs also change the uterine lining making it difficult for implantation to occur if fertilization has already happened. A great benefit of an IUD is that it can be left in for years, but is still reversible. Because there is such a small chance of user error, IUDs are more than 99% effective. Some women may experience pain or discomfort during IUD insertion and cramping in the days following. Always feel empowered to ask you provider about what pain or numbing medications can be used to make the experience more comfortable.

There are four hormonal IUDs and one non-hormonal IUD. The hormonal IUDs are known as Liletta, Mirena, Kyleena, and Skyla.  The first three are currently protective for five years. Skyla is a three-year IUD.

The nicest bonus of the hormonal IUD is that periods are typically very light or disappear. Also, the systemic side effects of the other types of hormonal birth control are nearly non-existent, since the IUD works as a local effect on the inside of the uterus.  It is one of the preferred methods of birth control for people with contraindications to estrogen-containing birth control.

The hormonal IUDs do not release enough hormone to suppress ovulation. As a result, your ovaries still secrete hormones normally, but with this comes acne that some women experience after ovulation, PMS symptoms, and ovulation pain (the CHC can help with these if they are a problem for you).

The copper IUD (i.e., Paragard) can be left in for 10 years and is suitable option for a woman who is looking for a hormone-free option.  Paragard may be optimal for women who have breast cancer or an increased risk for breast cancer. 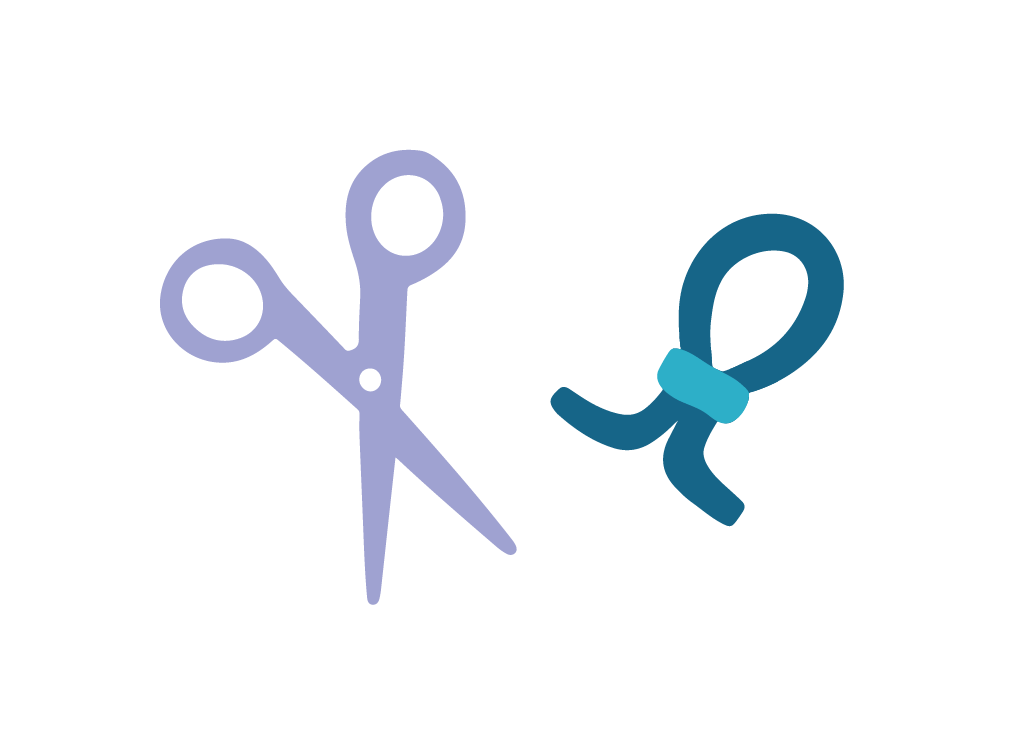 Tubal ligation (or sometimes called “getting your tubes tied”) is a long-term solution to preventing pregnancy. It is a surgical procedure that closes, cuts, or removes pieces of your fallopian tubes. When your fallopian tubes are blocked or removed, sperm can’t travel to the egg to cause pregnancy. Sterilization is a surgical procedure, so should only be considered if you’re confident you don’t want to become pregnant at in the future.

TLDR; There’s no one-size-fits-all approach when it comes to birth control. It’s important to consider your medical history, lifestyle factors, and future reproductive plans. Talking with your Axia Women’s Health provider can help you to explore the best option for you!