What's Up, Down There

The Female Anatomy 101: An Intimate Look At Our Bodies

In our series, “What’s Up, Down There,” we’re covering important vaginal health topics you might not have learned in health class. In this issue, we’re exploring the different parts of the female anatomy, specifically our reproductive organs. Many of us haven’t spent much time really examining what we look like down there, but doing so can be beneficial. Familiarizing yourself with your own body can help you to make more informed choices about your health! 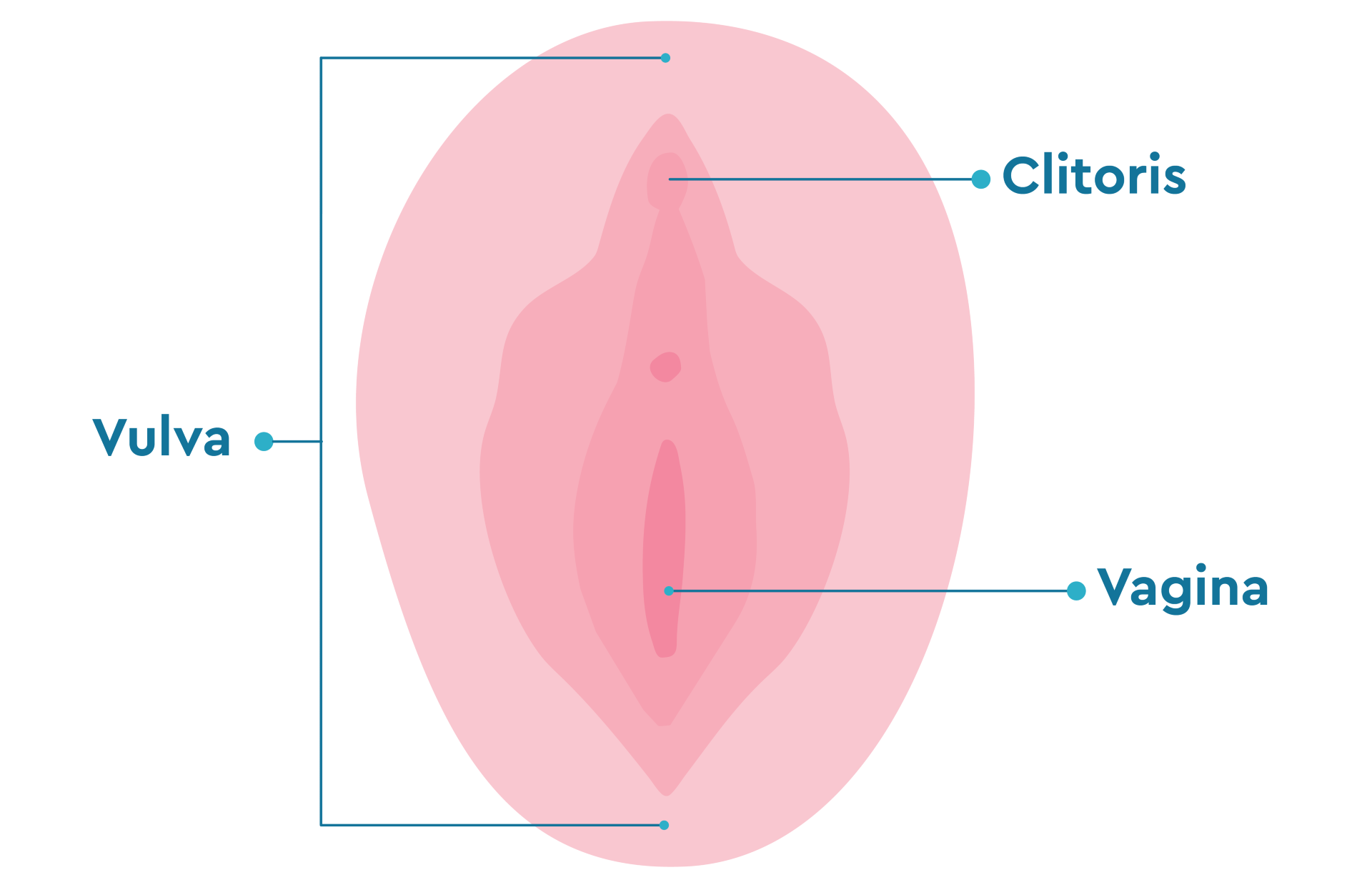 The word “vagina” has become an all-encompassing term used to refer to the general area “down there.” When in fact, the vagina is a complex part of our internal anatomy.

The vagina is a muscular tube that extends from the vaginal opening to the uterus. A thin piece of tissue, known as the hymen, partially covers the vaginal opening. The hymen may vary in size, shape, thickness, and some women may not have one at all. Evolution suggests it may be present to keep out bacteria, but experts aren’t convinced it has a real purpose.

Overall, the vagina is an incredible organ that can expand and contract, allowing us to insert something as small as a tampon or expand wide to birth a baby. Fun fact: the average vagina is between 2.5 -3.0 inches wide and 3 – 4 inches long, but it can stretch up to 200% due to its elasticity!

Often when people use the word “vagina,” they’re actually referring to the vulva. The vulva consists of all of our external female sex organs including the mons pubis (pubic hair area), labia majora (outer lips), labia minora (inner lips), and the clitoris. These organs play a key part in sexual arousal.

Labia can range in color from pink to red to brown to purplish. When it comes to shape, there are several general labia types from asymmetric inner or outer labia, to curved outer labia, and dangling inner or outer labia. While society may suggest there’s a certain appearance that’s “normal”, the truth is no woman is the same. Labia come in all different colors and shapes and all are normal!

What you may not realize is that most of the clitoris is not visible.

The clitoris is located above the vaginal opening. The glans clitoris is the external part of the clitoris and what most refer to as the “clitoris.” Though it is only about the size of a pea, it’s the most highly sensitive area of our body with over 8,000 nerve endings. It is covered by the clitoral hood, which also contains nerve endings.

The body of the clitoris is shaped like a wishbone structure inside our body. The legs of the clitoris, technically known as the crura, and the vestibular bulbs, contain erectile tissue (much like a man’s penis) that swell and become erect when aroused. Naturally, the main role of the clitoris is to aid in sexual arousal. 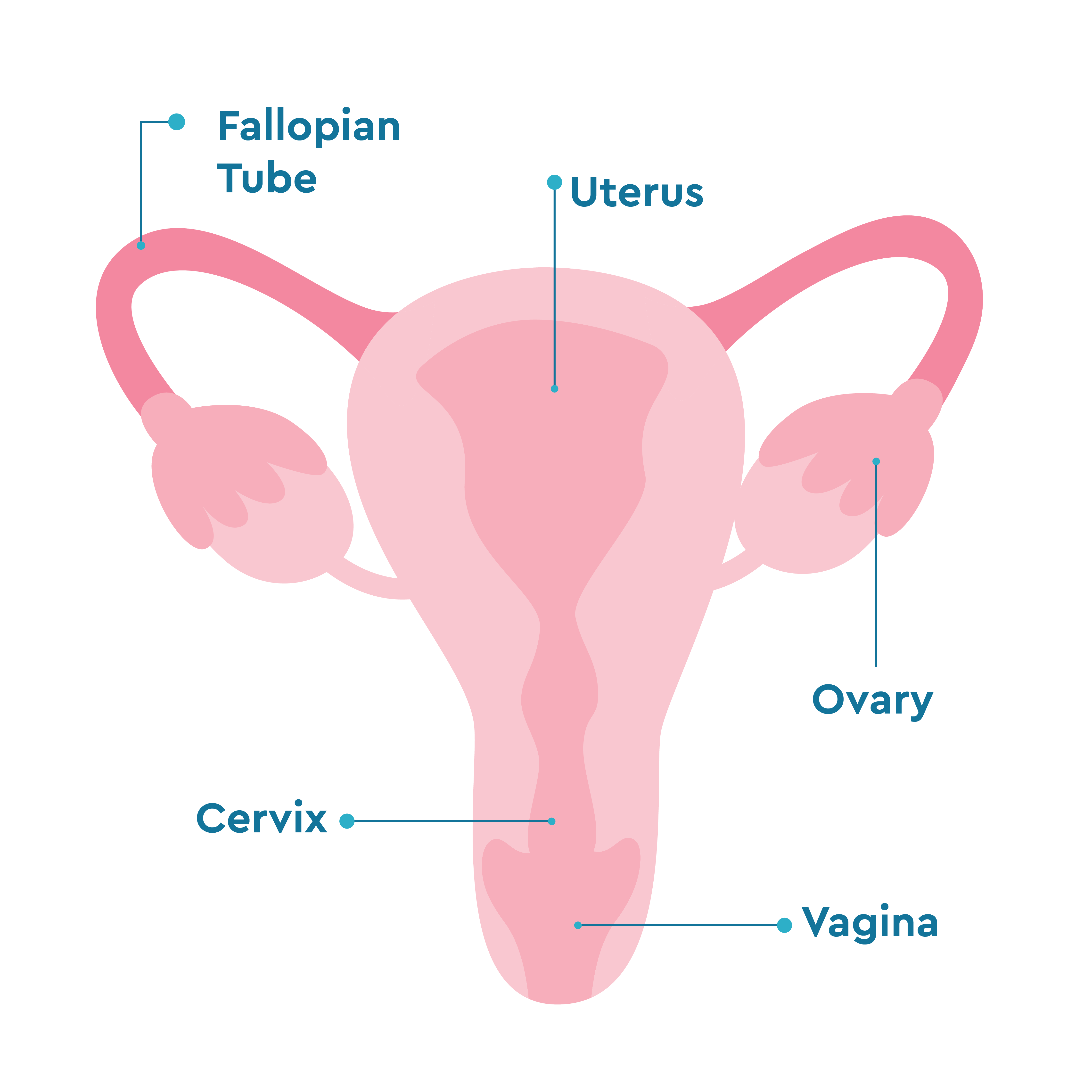 The uterus is a muscular, pear-shaped organ located between the bladder and the rectum. Also known as the womb, the uterus is where a fetus grows and develops during pregnancy. If an egg (oocyte) enters the uterus and isn’t fertilized by sperm, the inner lining of the uterus will shed through the process of menstrual bleeding.

The cervix is the lowest part of the uterus, and acts as a door to the rest of the reproductive system. It is a narrow, neck-shaped passageway connecting the vagina to the uterus. It plays an important role in keeping unwanted bacteria out of the uterus and allowing substances like sperm in and blood out during menstruation.

The ovaries are two small oval-shaped glands, about the size of a grape, located on either side of the uterus. The ovaries are where eggs (oocytes) and key hormones estrogen and progesterone are produced. The ovaries take turns releasing an egg each menstrual cycle. If the egg is fertilized by sperm, it begins the process of conception. If it is not fertilized, we shed the egg through our menstrual period.

Getting up close and personal with your body is a powerful way to take charge of your health. If you want to understand more about what’s up down there, talk to your Axia Women’s Health provider. No question is ever off limits!